On the west side of Toronto there’s a little town of about 600,000 called Mississauga. That’s where Julia Madeleine lives and works and writes nasty little tales of mayhem and suspense.  She’s also a tattoo artist and runs a shop with her husband. You can check out her artwork at www.malefictattoos.com. 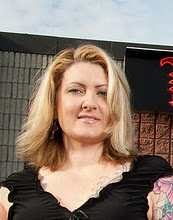 Q1: Who is Scarlet Rose?

Scarlet Rose, whose real name is Sylvia Dalton (no relation to Roman, the werewolf PI), is a washed up, narcissistic psychopath burlesque queen from the 1960s whose only purpose in life is to get her hands on other people’s money. According to her estranged daughter, she’s “the Cruella Deville” of all mothers. When her ex-husband turns up tortured and murdered in a Toronto area hotel room, her daughter whom she forced into the adult entertainment industry at the age of sixteen, has to help the police find the killer.

Q2: No One To Hear You Scream is a very dramatic novel. Have you had any film interest?

Not yet, but if you know anyone in the industry Paul, you could be my agent. I think it would make for a great movie.

Q3: Can you tell us a bit more about The Devils Music?

The Devil’s Music is a short story I initially wrote to be included in a program for a local blues festival we have here in Mississauga (west side of Toronto) called the South Side Shuffle. Then Trestle Press put it out as an ebook download. It’s a dark story about Sadie, a femme fatale character who’s the daughter of the devil. Sadie time travels to different eras, collecting the souls of all the great musical legends who’ve signed a contract with her in an exchange for their success. In the first installment Sadie turns up in Memphis in the 1930s, calling on the King Of The Delta Blues whose contract has expired.

Q4: What is the scariest piece of music you’ve ever heard?

Axel Rose singing Sweet Child Of Mine. His voice sounds like a circular saw hitting formica. Tubular Bells always sends a chill down my spine, as well as the theme from the original Halloween.

Q5: Is it popular for people to get tattoos for Halloween?

Not so much. Valentine’s day on the other hand, is an occasion when people come in for tattoos. All those lovers trying to immortalize their love in the flesh. One Valentine’s we had a couple come in for matching heart tattoos and they argued the entire time. Kind of ironic. Around St. Paddy’s day we get a few people requesting clovers and Fighting Irish logos.

Q6: What’s on the cards at the moment?

Something really exciting is in the works but I’m sworn to secrecy. I will tell you this though: the whole damn thing is Keith Rawson’s fault! Besides that, the other exciting thing I’ve got going on is the release of The Truth About Scarlet Rose, a new edition of the first book that includes a sequel, which is scheduled for December.

NO ONE TO HEAR YOU SCREAM, available now on Amazon. THE TRUTH ABOUT SCARLET ROSE, scheduled for release Dec. 2011.