Here’s what their band page says about Coma Stereo:

“Coma Stereo is a Slovenian (trans) galactic 4 piece unit. Harboured in Maribor’s cultural centre Pekarna and on many stages across Balkan and Europe. Under their belts are 3 full length albums recorded at the analogue Kramasonik studio in Zagreb. A powerfull rhythm section, floating guitar sounds and spacey synth oscillations.”

But it is not true. They are in fact from Space.
Jason Michel had a Close Encounter Of The Coma Stereo Kind!
*

Q1: Tell our ignorant readership who you guys are & about your latest offering.

We are Coma Stereo, a band from Maribor, Slovenia. Making music since 2004, we have released 3 albums 1 EP and toured a lot through Europe. Our newest album 1000 mest (eng. 1000 cities) is a mixture of old school electronica, melodic bass lines, pounding drums and dirty guitars, wrapped up in haunting vocals. Recorded all analog on tape and released on vinyl, it sounds like Eastern horror movies vs. Western space odysseys.

Q2: & your inspirations, who made you want to play Space Rock?

It just came this way, partly because we have a shitload of analog equipment we can use and also because of growing up in the 80’s/early 90’s, watching old school sci fi movies on German television. We draw more from movies and books than from music in general. It’s fun to get out there and play some sort of “rock”, filled with bleeps and swoooshs… We have a lot of fun. It sounds (and looks?) like a one legged hobo doing the waltz. Heavy and beautiful at the same time.

Q3: You’re the first band from Slovenia in these pages.

What is the most popular kind of music there right now?

Hm, I dunno… Slovenia is so small, it’s hard to tell. You usually have 3-4 bands covering one genre. I noticed in Europe, math rock seems to be pretty high regarded in the underground nowadays but in Slovenia I guess it’s noise rock, maybe also some sort of hipster electronica projects. For a country of 2 million we have quite a lot of bands and scenes going on, some pretty good bands actually.

Q4: Tell us a little about where you guys come from, what’s happening up there?

What do Slovenians think of Slavoj Žižek, the most famous Slovenian here in the West?

Maribor, the town most of us grew up in was an industrial powerhouse in old Yugoslavia, then after the separation it broke down really hard. The town is trying to get back on its feet but at times it seems to be pretty depressing here, at least economically speaking, it’s one of the poorer regions in Slovenia. The town is this years European capital of culture. We all moved away now, Sasho lives in Berlin, Marko is in Ljubljana, etc. Maribor seems like an alienated town with its own little world and rules, its like a microcosm inside a tiny state. It’s unreal. Nonetheless Slovenia in general is a pretty cool place to live in, lot’s of space and opportunities, a lot of bands and music lovers. Also a lot of clubs and youth centers where you can play your music. We love it here.

As far as mr. Žižek goes, I don’t think the majority of Slovenians see him as the most popular Slovenian figure in the western world. Athletes usually get the vote here, or Laibach. He is still regarded in a high fashion though. One promoter in Amsterdam once wrote “Coma Stereo is Slavoj Žižeks favourite backing band” which was pretty funny to us. It would be cool to tour with him, see who can last longer…

Q5: Seeing as you play Space Rock, I couldn’t resist this Question.

Which planet would you like to visit & do you believe that we are not alone in this big old universe?

A planet like Earth but with completely different species and lonely beaches with crystal clear water. You know, one of those planets with giant underworld worms and big insects, 12 moons and 2 suns. Naked girls and good food. A planet to visit and explore! The sci fi equivalent of taking acid and going to the Croatian seaside.

Q6: What do you guys write about & how important are the lyrics compared to the music?

The music comes first, period. If we can’t tell the story with the music alone then the song is crap and it gets thrown away. The lyrics are there to enhance the feeling and to direct the listener into a particular direction or to add some sort of emotional element, but they are in the “mix” and not in your face. Most of the songs are instrumentals and when there are vocals they are used more like an instrument. The new album is in Slovene but it is still getting a lot of recognition from foreign listeners because of the way we deal with voices and melodics.

Q7: When I think of bands like Hawkwind, sci-fi & especially Michael Moorcock was a huge influence.

What about you guys, who are your favourite writers or artists?

It’s always a mix, sometimes conscious and sometimes just random stuff we don’t even think about but get exposed to during the days. Every album has a central “theme” or story. The first album Binary Endings was inspired heavily by THX 1138, the feeling of being kept somewhere in a state of half consciousness. Our previous album Transgalaktika drew a lot from the movie Dark Star (Carpenter) and space travel in general, also the cold war. (old american instructional videos in case of an atomic holocaust)

1000 mest was inspired by old school zombie movies, especially italian horror and Romero. Some songs like “Drakula” were inspired by vampires, but not one artist in particular – more from Eastern European imagery and melodics. Well, blood sucking seems to be the main inspiration on this one, heh.

We are fascinated with the future from the past. You know, the way people in the 50s thought the future would look nowadays. Retro futurism has been the main inspiration for Coma Stereo ever since we started.

Q8: Finally gents,what’s in the offing for Coma Stereo? Where next?

We just came home from a tour through central Europe so now it’s time to promote the new album in the Balkan region. It’s still fresh and we hope to keep the momentum for the next 2 years, before going into the studio and record the next one. We will try to reinvent the band until then, bring some new ideas to the table and kick some fucking ass. 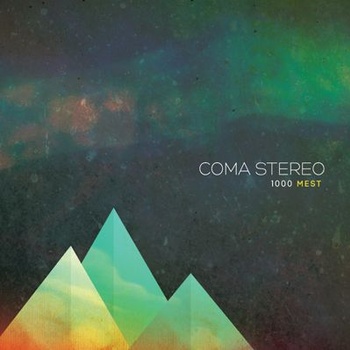 From the menacing opening track Črna jutra to the final John Carpenter-esque swagger of Mrk, 1000 mest is a joyous & inter-galactic analog feast that feels like the bastard offspring of Hawkwind’s cosmic wanderings,  the echo-y Surf Rock of Man Or Astroman? & the intensity of a howling Sigur Ros.

The fierce mad bass-line fighting with the drums during Harakiri & the bloop beep analog noodling of Uspavanka za tigre are a sinister pleasure to hear.

I loved it & am listening to it right now.